Complete the form below to receive the latest headlines and analysts' recommendations for Extraction Oil & Gas with our free daily email newsletter:

Wall Street brokerages forecast that Extraction Oil & Gas Inc (NASDAQ:XOG) will report sales of $234.47 million for the current quarter, according to Zacks. Three analysts have provided estimates for Extraction Oil & Gas’ earnings, with the highest sales estimate coming in at $255.80 million and the lowest estimate coming in at $220.60 million. Extraction Oil & Gas posted sales of $221.92 million in the same quarter last year, which suggests a positive year-over-year growth rate of 5.7%. The company is expected to issue its next earnings results on Thursday, May 7th.

According to Zacks, analysts expect that Extraction Oil & Gas will report full-year sales of $939.30 million for the current fiscal year, with estimates ranging from $860.00 million to $1.00 billion. For the next fiscal year, analysts anticipate that the company will report sales of $957.51 million, with estimates ranging from $927.00 million to $989.70 million. Zacks Investment Research’s sales calculations are a mean average based on a survey of sell-side research firms that that provide coverage for Extraction Oil & Gas.

Extraction Oil & Gas, Inc, an independent oil and gas company, focuses on the acquisition, development, and production of oil, natural gas, and natural gas liquid reserves in the Rocky Mountain region, primarily in the Wattenberg Field of the Denver-Julesburg (DJ) Basin of Colorado. The company also engages in the construction and support of midstream assets to gather, process, and produce crude oil and gas.

Recommended Story: Most Volatile Stocks – What Investors Need to Know to Maximize ROI 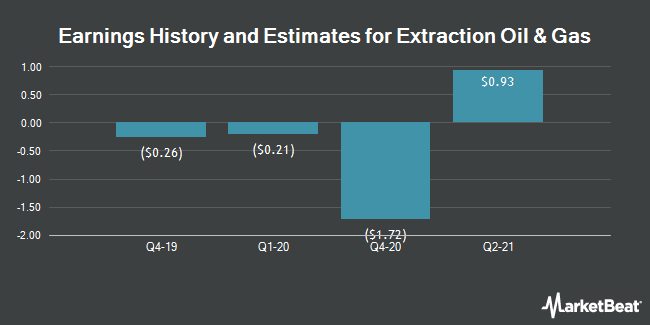