Daily Ratings & News for Under Armour

Complete the form below to receive the latest headlines and analysts' recommendations for Under Armour with our free daily email newsletter:

Under Armour (NYSE:UA) was downgraded by analysts at Goldman Sachs Group to a “hold” rating in a report issued on Wednesday, TipRanks reports. They presently have a $9.00 target price on the stock. Goldman Sachs Group’s price objective indicates a potential upside of 2.74% from the company’s previous close.

Under Armour (NYSE:UA) last posted its quarterly earnings data on Tuesday, February 11th. The company reported $0.10 earnings per share for the quarter, missing the Thomson Reuters’ consensus estimate of $0.11 by ($0.01). Under Armour had a return on equity of 7.18% and a net margin of 1.75%. The business had revenue of $1.44 billion during the quarter.

Under Armour, Inc, together with its subsidiaries, develops, markets, and distributes branded performance apparel, footwear, and accessories for men, women, and youth primarily in North America, Europe, the Middle East, Africa, the Asia-Pacific, and Latin America. The company offers its apparel in compression, fitted, and loose types to be worn in hot and cold.

Read More: What is Cost of Goods Sold (COGS)? 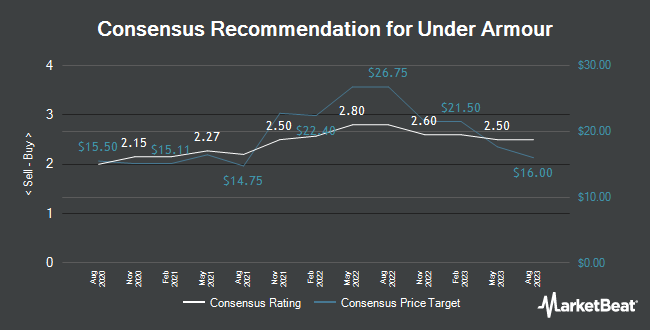