Complete the form below to receive the latest headlines and analysts' recommendations for Visa with our free daily email newsletter:

Visa (NYSE:V) had its target price decreased by Royal Bank of Canada from to in a research note issued to investors on Thursday, The Fly reports.

Visa (NYSE:V) last posted its earnings results on Thursday, January 30th. The credit-card processor reported $1.46 earnings per share for the quarter, meeting the Zacks’ consensus estimate of $1.46. The business had revenue of $6.05 billion during the quarter, compared to analyst estimates of $6.08 billion. Visa had a return on equity of 43.15% and a net margin of 52.60%. The company’s quarterly revenue was up 10.0% compared to the same quarter last year. During the same quarter in the previous year, the firm earned $1.30 EPS. As a group, equities analysts expect that Visa will post 6.02 EPS for the current year.

Visa Inc operates as a payments technology company worldwide. The company facilitates commerce through the transfer of value and information among consumers, merchants, financial institutions, businesses, strategic partners, and government entities. It operates VisaNet, a processing network that enables authorization, clearing, and settlement of payment transactions; and offers fraud protection for account holders and assured payment for merchants.

See Also: What is Cost of Goods Sold (COGS)? 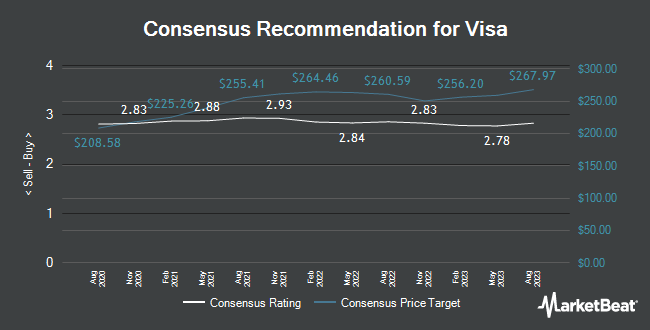 Receive News & Ratings for Visa Daily - Enter your email address below to receive a concise daily summary of the latest news and analysts' ratings for Visa and related companies with MarketBeat.com's FREE daily email newsletter.