Complete the form below to receive the latest headlines and analysts' recommendations for Translate Bio with our free daily email newsletter:

Brokerages expect Translate Bio Inc (NASDAQ:TBIO) to post sales of $2.18 million for the current fiscal quarter, Zacks reports. Four analysts have made estimates for Translate Bio’s earnings, with the highest sales estimate coming in at $3.70 million and the lowest estimate coming in at $1.20 million. Translate Bio reported sales of $1.17 million during the same quarter last year, which would suggest a positive year-over-year growth rate of 86.3%. The firm is expected to report its next earnings report on Wednesday, July 29th.

On average, analysts expect that Translate Bio will report full year sales of $10.91 million for the current financial year, with estimates ranging from $8.73 million to $14.60 million. For the next financial year, analysts forecast that the company will post sales of $10.33 million, with estimates ranging from $6.00 million to $14.60 million. Zacks’ sales calculations are an average based on a survey of research analysts that cover Translate Bio.

Translate Bio (NASDAQ:TBIO) last issued its earnings results on Thursday, March 12th. The company reported ($0.48) earnings per share for the quarter, missing the Zacks’ consensus estimate of ($0.36) by ($0.12). The business had revenue of $3.89 million during the quarter, compared to analyst estimates of $3.06 million. Translate Bio had a negative net margin of 859.22% and a negative return on equity of 63.61%.

Translate Bio, Inc, a clinical-stage messenger RNA (mRNA) therapeutics company, develops medicines to treat diseases caused by protein or gene dysfunction. The company is developing MRT5005, which is in Phase I/II clinical trial for the treatment of cystic fibrosis; and MRT5201 to treat ornithine transcarbamylase deficiency. 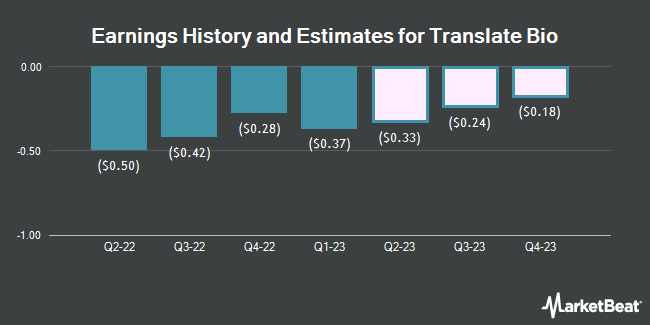