Complete the form below to receive the latest headlines and analysts' recommendations for ASOS with our free daily email newsletter:

ASOS plc (LON:ASC) Given Consensus Recommendation of “Hold” by Analysts

ASOS plc (LON:ASC) has been assigned an average rating of “Hold” from the nineteen ratings firms that are covering the company, MarketBeat.com reports. Two research analysts have rated the stock with a sell rating, six have given a hold rating and eleven have issued a buy rating on the company. The average twelve-month target price among brokerages that have issued a report on the stock in the last year is GBX 3,518.93 ($43.30).

ASOS Plc, together with its subsidiaries, operates as an online fashion retailer in the United Kingdom, the United States, Australia, France, Germany, Spain, Italy, Sweden, the Netherlands, and Russia. The company offers womenswear, menswear, and sportswear products. It sells approximately 85,000 branded and ASOS brand products primarily through its Website, asos.com, as well as through social media platforms and magazines. 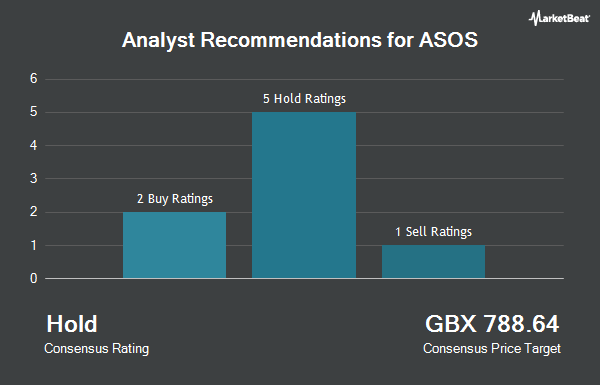 Receive News & Ratings for ASOS Daily - Enter your email address below to receive a concise daily summary of the latest news and analysts' ratings for ASOS and related companies with MarketBeat.com's FREE daily email newsletter.