Complete the form below to receive the latest headlines and analysts' recommendations for Franklin Resources with our free daily email newsletter:

Franklin Resources, Inc. (NYSE:BEN) declared a quarterly dividend on Tuesday, June 30th, RTT News reports. Shareholders of record on Wednesday, July 15th will be given a dividend of 0.27 per share by the closed-end fund on Monday, July 27th. This represents a $1.08 annualized dividend and a dividend yield of 5.15%.

Franklin Resources (NYSE:BEN) last released its earnings results on Thursday, April 30th. The closed-end fund reported $0.66 earnings per share for the quarter, beating analysts’ consensus estimates of $0.44 by $0.22. Franklin Resources had a return on equity of 12.36% and a net margin of 17.29%. The firm had revenue of $1.34 billion during the quarter, compared to the consensus estimate of $1.32 billion. During the same period in the prior year, the company posted $0.72 EPS. The company’s revenue was down 6.7% compared to the same quarter last year. As a group, sell-side analysts predict that Franklin Resources will post 2.57 EPS for the current fiscal year.

Franklin Resources, Inc is a publicly owned asset management holding company. Through its subsidiaries, the firm provides its services to individuals, institutions, pension plans, trusts, and partnerships. It launches equity, fixed income, balanced, and multi-asset mutual funds through its subsidiaries. 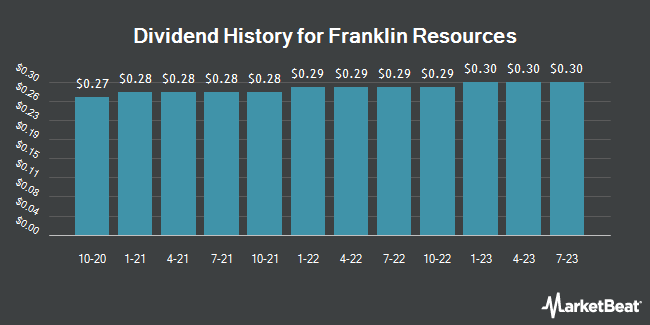