Complete the form below to receive the latest headlines and analysts' recommendations for Avangrid with our free daily email newsletter:

Avangrid (NYSE:AGR) was upgraded by stock analysts at Wells Fargo & Co from an “equal weight” rating to an “overweight” rating in a research note issued on Wednesday, Marketbeat Ratings reports. The brokerage currently has a $48.00 price objective on the utilities provider’s stock. Wells Fargo & Co‘s price objective indicates a potential upside of 14.34% from the company’s previous close.

Other research analysts have also issued research reports about the stock. Bank of America raised shares of Avangrid from an “underperform” rating to a “neutral” rating and raised their target price for the company from $43.00 to $47.00 in a research note on Thursday, April 30th. Seaport Global Securities initiated coverage on shares of Avangrid in a report on Wednesday, May 20th. They issued a “neutral” rating on the stock. Zacks Investment Research raised shares of Avangrid from a “hold” rating to a “buy” rating and set a $49.00 target price for the company in a report on Friday, May 29th. Finally, Janney Montgomery Scott raised Avangrid from a “sell” rating to a “neutral” rating and set a $46.00 price target on the stock in a research note on Friday, March 13th. Two research analysts have rated the stock with a sell rating, four have assigned a hold rating and two have assigned a buy rating to the company. The company has a consensus rating of “Hold” and a consensus price target of $48.71.

Avangrid (NYSE:AGR) last released its earnings results on Tuesday, April 28th. The utilities provider reported $0.76 earnings per share for the quarter, hitting analysts’ consensus estimates of $0.76. The company had revenue of $1.79 billion during the quarter, compared to the consensus estimate of $1.90 billion. Avangrid had a return on equity of 4.41% and a net margin of 11.50%. The firm’s quarterly revenue was down 2.9% on a year-over-year basis. During the same quarter in the previous year, the company posted $0.71 earnings per share. As a group, equities analysts expect that Avangrid will post 2.22 earnings per share for the current fiscal year.

Avangrid, Inc operates as an energy services holding company in the United States. It operates through two segments, Networks and Renewables. The company engages in the generation, transmission, and distribution of electricity, as well as distribution, transportation, and sale of natural gas. It also develops, constructs, and operates renewable energy generation facilities primarily using onshore wind power, as well as solar, biomass, and thermal power.

Further Reading: What is the LIBOR? 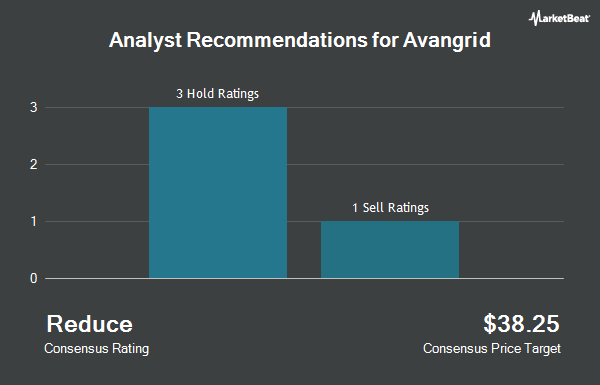 Receive News & Ratings for Avangrid Daily - Enter your email address below to receive a concise daily summary of the latest news and analysts' ratings for Avangrid and related companies with MarketBeat.com's FREE daily email newsletter.