Complete the form below to receive the latest headlines and analysts' recommendations for Oracle with our free daily email newsletter:

Equities research analysts expect that Oracle Co. (NYSE:ORCL) will announce sales of $9.15 billion for the current quarter, according to Zacks Investment Research. Eight analysts have made estimates for Oracle’s earnings. The lowest sales estimate is $8.99 billion and the highest is $9.22 billion. Oracle reported sales of $9.22 billion during the same quarter last year, which indicates a negative year over year growth rate of 0.8%. The company is scheduled to report its next earnings report on Wednesday, September 9th.

Oracle (NYSE:ORCL) last announced its quarterly earnings data on Tuesday, June 16th. The enterprise software provider reported $1.20 earnings per share (EPS) for the quarter, beating the Zacks’ consensus estimate of $1.08 by $0.12. Oracle had a net margin of 25.94% and a return on equity of 72.76%. The company had revenue of $10.44 billion during the quarter, compared to analysts’ expectations of $10.72 billion. During the same quarter in the prior year, the company earned $1.16 EPS. The firm’s revenue was down 6.3% on a year-over-year basis.

The business also recently declared a quarterly dividend, which will be paid on Tuesday, July 28th. Stockholders of record on Wednesday, July 15th will be issued a dividend of $0.24 per share. This represents a $0.96 dividend on an annualized basis and a dividend yield of 1.74%. The ex-dividend date is Tuesday, July 14th. Oracle’s payout ratio is presently 27.75%.

Oracle declared that its board has initiated a share repurchase program on Thursday, March 12th that allows the company to repurchase $15.00 billion in outstanding shares. This repurchase authorization allows the enterprise software provider to buy up to 9.8% of its shares through open market purchases. Shares repurchase programs are typically an indication that the company’s management believes its stock is undervalued.

Oracle Corporation develops, manufactures, markets, sells, hosts, and supports application, platform, and infrastructure solutions for information technology (IT) environments worldwide. The company provides services in three primary layers of the cloud: Software as a Service, Platform as a Service, and Infrastructure as a Service. 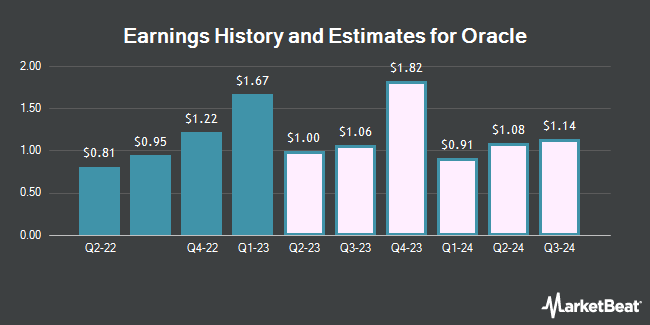 Receive News & Ratings for Oracle Daily - Enter your email address below to receive a concise daily summary of the latest news and analysts' ratings for Oracle and related companies with MarketBeat.com's FREE daily email newsletter.

$598.74 Million in Sales Expected for NortonLifeLock Inc. This Quarter