Complete the form below to receive the latest headlines and analysts' recommendations for Fastenal with our free daily email newsletter:

$1.41 Billion in Sales Expected for Fastenal (NASDAQ:FAST) This Quarter

Wall Street brokerages forecast that Fastenal (NASDAQ:FAST) will post $1.41 billion in sales for the current fiscal quarter, according to Zacks. Seven analysts have provided estimates for Fastenal’s earnings, with estimates ranging from $1.39 billion to $1.45 billion. Fastenal posted sales of $1.38 billion in the same quarter last year, which would indicate a positive year over year growth rate of 2.2%. The company is scheduled to announce its next earnings report before the market opens on Tuesday, October 13th.

On average, analysts expect that Fastenal will report full-year sales of $5.61 billion for the current financial year, with estimates ranging from $5.51 billion to $5.68 billion. For the next fiscal year, analysts anticipate that the firm will post sales of $5.88 billion, with estimates ranging from $5.49 billion to $6.03 billion. Zacks’ sales calculations are a mean average based on a survey of sell-side research analysts that that provide coverage for Fastenal.

Fastenal (NASDAQ:FAST) last released its quarterly earnings data on Tuesday, July 14th. The company reported $0.42 earnings per share (EPS) for the quarter, beating the consensus estimate of $0.36 by $0.06. Fastenal had a net margin of 15.07% and a return on equity of 31.19%. The business had revenue of $1.51 billion during the quarter, compared to analyst estimates of $1.47 billion. During the same quarter in the previous year, the business earned $0.36 EPS. Fastenal’s quarterly revenue was up 10.3% compared to the same quarter last year.

The business also recently disclosed a quarterly dividend, which was paid on Tuesday, August 25th. Stockholders of record on Tuesday, July 28th were issued a dividend of $0.25 per share. The ex-dividend date was Monday, July 27th. This represents a $1.00 annualized dividend and a dividend yield of 2.26%. Fastenal’s payout ratio is 72.46%. 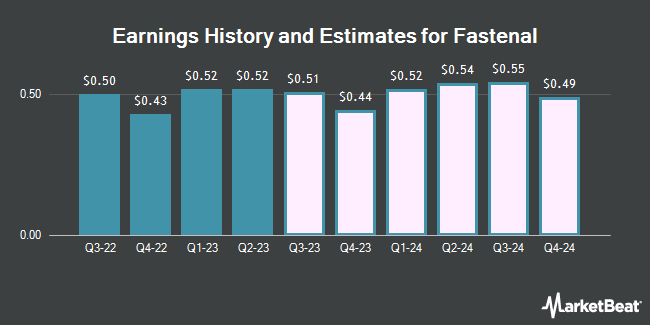 Receive News & Ratings for Fastenal Daily - Enter your email address below to receive a concise daily summary of the latest news and analysts' ratings for Fastenal and related companies with MarketBeat.com's FREE daily email newsletter.

Komet Resources Shares Gap Down to $0.25