Dolby Laboratories, Inc. (NYSE:DLB) announced a quarterly dividend on Thursday, November 12th, Zacks reports. Shareholders of record on Tuesday, November 24th will be given a dividend of 0.22 per share by the electronics maker on Friday, December 4th. This represents a $0.88 dividend on an annualized basis and a yield of 1.00%. The ex-dividend date of this dividend is Monday, November 23rd.

Dolby Laboratories (NYSE:DLB) last posted its earnings results on Thursday, November 12th. The electronics maker reported $0.45 EPS for the quarter, beating analysts’ consensus estimates of $0.20 by $0.25. The firm had revenue of $271.20 million during the quarter, compared to the consensus estimate of $245.04 million. Dolby Laboratories had a return on equity of 9.95% and a net margin of 19.91%. The company’s quarterly revenue was down 9.3% compared to the same quarter last year. During the same period in the prior year, the company earned $0.66 EPS. As a group, analysts expect that Dolby Laboratories will post 2.3 earnings per share for the current year.

A number of research analysts have recently commented on DLB shares. B. Riley increased their target price on Dolby Laboratories from $73.00 to $79.00 and gave the company a “neutral” rating in a research report on Friday, November 13th. Zacks Investment Research upgraded Dolby Laboratories from a “sell” rating to a “hold” rating and set a $73.00 price target on the stock in a report on Friday, August 7th. Finally, Barrington Research increased their price target on Dolby Laboratories from $70.00 to $83.00 and gave the company an “outperform” rating in a report on Wednesday, August 5th. Three investment analysts have rated the stock with a hold rating and three have assigned a buy rating to the company. The stock has an average rating of “Buy” and a consensus target price of $75.00.

Dolby Laboratories, Inc creates audio and imaging technologies that transform entertainment and communications at the cinema, at home, at work, and on mobile devices. The company develops and licenses its audio technologies, such as AAC & HE-AAC, a digital audio codec solution used for a range of media applications.; AVC, a digital video codec with high bandwidth efficiency used in media devices; Dolby AC-4, an audio coding technology that delivers new audio experiences to a range of playback devices; and Dolby Atmos technology for cinema and a range of media devices.

Recommended Story: What is a Reverse Stock Split? 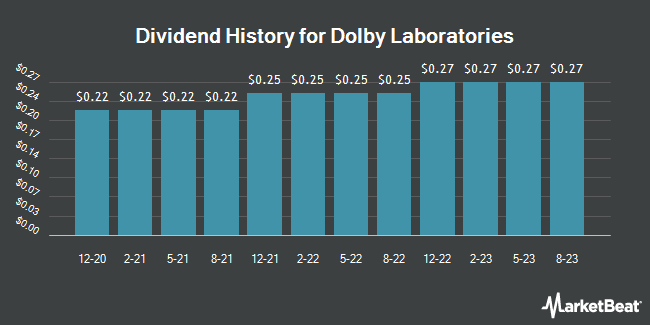 Complete the form below to receive the latest headlines and analysts' recommendations for Dolby Laboratories with our free daily email newsletter: