Apogee Enterprises, Inc. (NASDAQ:APOG) announced a quarterly dividend on Wednesday, January 13th, Zacks reports. Stockholders of record on Monday, February 1st will be given a dividend of 0.20 per share by the industrial products company on Tuesday, February 16th. This represents a $0.80 annualized dividend and a dividend yield of 2.16%. The ex-dividend date is Friday, January 29th. This is a boost from Apogee Enterprises’s previous quarterly dividend of $0.19.

Apogee Enterprises has increased its dividend by 33.9% over the last three years.

In other news, Director Bernard P. Aldrich sold 20,000 shares of the stock in a transaction on Wednesday, December 23rd. The shares were sold at an average price of $32.51, for a total transaction of $650,200.00. Following the transaction, the director now owns 15,652 shares in the company, valued at approximately $508,846.52. The sale was disclosed in a document filed with the SEC, which is accessible through the SEC website. 3.10% of the stock is owned by corporate insiders. 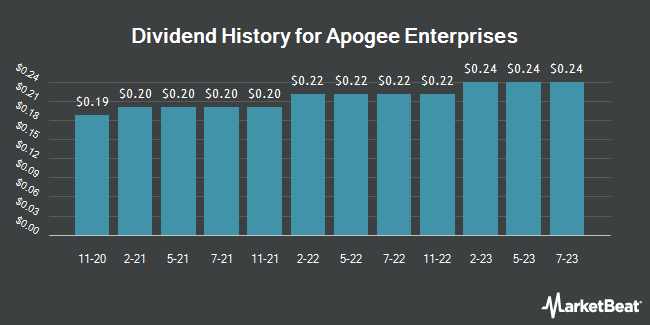 Tidewater Midstream and Infrastructure Shares Down 1.4%

Complete the form below to receive the latest headlines and analysts' recommendations for Apogee Enterprises with our free daily email newsletter: