Golar LNG Partners (NASDAQ:GMLP) was downgraded by stock analysts at Stifel Nicolaus from a “buy” rating to a “hold” rating in a research report issued on Thursday, Briefing.com reports. They presently have a $3.55 target price on the shipping company’s stock, down from their prior target price of $5.00. Stifel Nicolaus’ price target indicates a potential upside of 3.80% from the company’s current price.

A number of other research firms also recently issued reports on GMLP. Zacks Investment Research raised Golar LNG Partners from a “sell” rating to a “hold” rating in a research report on Wednesday, December 2nd. Jefferies Financial Group reduced their price target on Golar LNG Partners from $5.00 to $4.00 and set a “buy” rating for the company in a report on Friday, October 23rd. Two analysts have rated the stock with a sell rating, four have given a hold rating and two have assigned a buy rating to the company. Golar LNG Partners currently has an average rating of “Hold” and an average price target of $3.86.

Golar LNG Partners (NASDAQ:GMLP) last released its quarterly earnings results on Sunday, November 29th. The shipping company reported $0.25 earnings per share (EPS) for the quarter, beating the Thomson Reuters’ consensus estimate of $0.22 by $0.03. The firm had revenue of $69.54 million for the quarter, compared to the consensus estimate of $70.48 million. Golar LNG Partners had a return on equity of 13.04% and a net margin of 9.97%. On average, analysts forecast that Golar LNG Partners will post 0.89 earnings per share for the current year.

Further Reading: What is meant by holder of record? 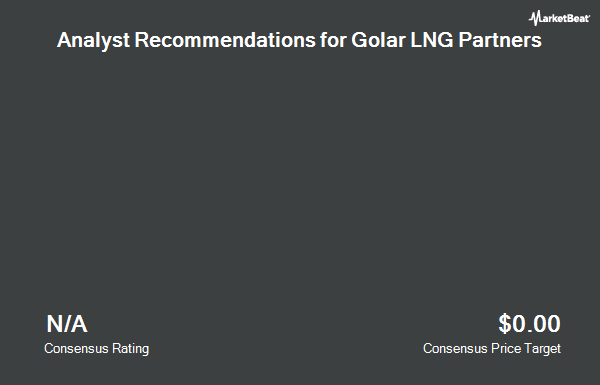 Complete the form below to receive the latest headlines and analysts' recommendations for Golar LNG Partners with our free daily email newsletter: