In related news, CEO Mitchell Shuster Steiner sold 20,000 shares of the stock in a transaction that occurred on Friday, February 12th. The stock was sold at an average price of $20.88, for a total transaction of $417,600.00. Following the completion of the sale, the chief executive officer now owns 7,184,767 shares in the company, valued at approximately $150,017,934.96. The sale was disclosed in a filing with the SEC, which is available through the SEC website. Insiders own 26.10% of the company’s stock.

Several equities analysts have recently commented on VERU shares. TheStreet cut shares of Veru from a “b-” rating to a “c” rating in a report on Monday, March 29th. Oppenheimer upped their target price on Veru from $19.00 to $24.00 in a research report on Thursday, February 11th. Cantor Fitzgerald lifted their price target on Veru from $6.00 to $15.00 and gave the company an “overweight” rating in a report on Monday, December 14th. Zacks Investment Research upgraded Veru from a “sell” rating to a “hold” rating in a report on Thursday, February 18th. Finally, HC Wainwright reduced their target price on shares of Veru from $22.00 to $21.00 and set a “buy” rating for the company in a research note on Wednesday, March 3rd. One analyst has rated the stock with a hold rating and four have assigned a buy rating to the company’s stock. Veru has a consensus rating of “Buy” and an average price target of $16.75.

Veru (NASDAQ:VERU) last posted its earnings results on Wednesday, February 10th. The company reported ($0.02) earnings per share for the quarter, topping the Thomson Reuters’ consensus estimate of ($0.04) by $0.02. Veru had a negative return on equity of 23.72% and a negative net margin of 44.55%. The firm had revenue of $14.62 million during the quarter, compared to analyst estimates of $10.63 million. On average, research analysts predict that Veru Inc. will post -0.24 EPS for the current year.

Veru Inc, an oncology biopharmaceutical company, focuses on developing medicines for the management of cancers. Its commercial products comprise FC2 female condom/internal condom for the dual protection against unintended pregnancy and the transmission of sexually transmitted infections for ministries of health, government health agencies, U.N.

Want to see what other hedge funds are holding VERU? Visit HoldingsChannel.com to get the latest 13F filings and insider trades for Veru Inc. (NASDAQ:VERU). 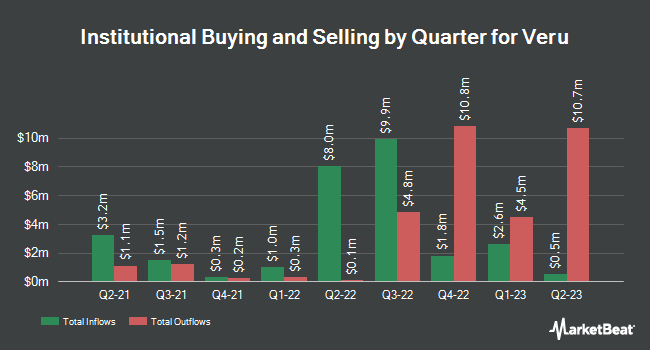 Receive News & Ratings for Veru Daily - Enter your email address below to receive a concise daily summary of the latest news and analysts' ratings for Veru and related companies with MarketBeat.com's FREE daily email newsletter.

$3.10 Billion in Sales Expected for DTE Energy This Quarter

Complete the form below to receive the latest headlines and analysts' recommendations for Veru with our free daily email newsletter: