Albemarle Co. (NYSE:ALB) announced a quarterly dividend on Tuesday, May 4th, RTT News reports. Stockholders of record on Friday, June 11th will be paid a dividend of 0.39 per share by the specialty chemicals company on Thursday, July 1st. This represents a $1.56 dividend on an annualized basis and a dividend yield of 0.96%.

Albemarle (NYSE:ALB) last posted its quarterly earnings data on Tuesday, February 16th. The specialty chemicals company reported $1.17 earnings per share for the quarter, topping the Thomson Reuters’ consensus estimate of $1.10 by $0.07. Albemarle had a net margin of 11.77% and a return on equity of 11.96%. The company had revenue of $879.15 million for the quarter, compared to analysts’ expectations of $876.15 million. During the same period in the prior year, the business earned $1.73 earnings per share. On average, equities analysts anticipate that Albemarle will post 3.94 EPS for the current fiscal year.

See Also: How Do You Calculate Return on Investment (ROI)? 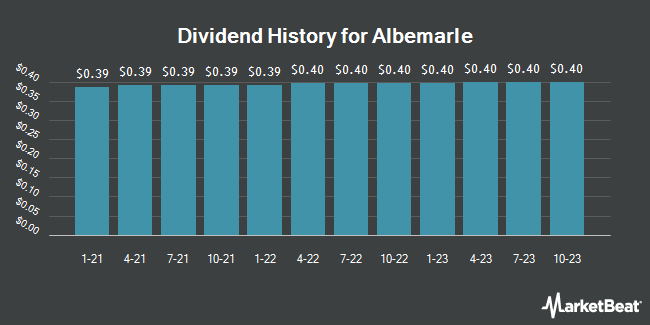 Complete the form below to receive the latest headlines and analysts' recommendations for Albemarle with our free daily email newsletter: