Illinois Municipal Retirement Fund increased its holdings in shares of WestRock (NYSE:WRK) by 11.7% in the first quarter, according to its most recent disclosure with the SEC. The firm owned 55,721 shares of the basic materials company’s stock after purchasing an additional 5,855 shares during the period. Illinois Municipal Retirement Fund’s holdings in WestRock were worth $2,900,000 as of its most recent filing with the SEC.

In other WestRock news, insider Jeffrey Wayne Chalovich sold 19,600 shares of the firm’s stock in a transaction that occurred on Thursday, March 11th. The shares were sold at an average price of $51.23, for a total value of $1,004,108.00. Following the sale, the insider now owns 123,694 shares in the company, valued at $6,336,843.62. The sale was disclosed in a document filed with the Securities & Exchange Commission, which is accessible through this link. Company insiders own 1.92% of the company’s stock.

WRK has been the subject of several recent research reports. UBS Group started coverage on WestRock in a research note on Tuesday, January 12th. They issued a “buy” rating and a $59.00 price target for the company. BMO Capital Markets increased their target price on WestRock from $54.00 to $61.00 and gave the stock an “outperform” rating in a report on Wednesday, March 10th. KeyCorp boosted their price target on WestRock from $35.00 to $40.00 and gave the company an “underweight” rating in a research note on Monday, April 5th. Deutsche Bank Aktiengesellschaft raised their target price on shares of WestRock from $58.00 to $59.00 in a report on Monday, April 19th. Finally, Zacks Investment Research downgraded shares of WestRock from a “buy” rating to a “hold” rating and set a $44.00 price target for the company. in a report on Tuesday, February 2nd. One investment analyst has rated the stock with a sell rating, three have given a hold rating and eight have issued a buy rating to the company. The stock currently has an average rating of “Buy” and a consensus price target of $49.27.

Want to see what other hedge funds are holding WRK? Visit HoldingsChannel.com to get the latest 13F filings and insider trades for WestRock (NYSE:WRK). 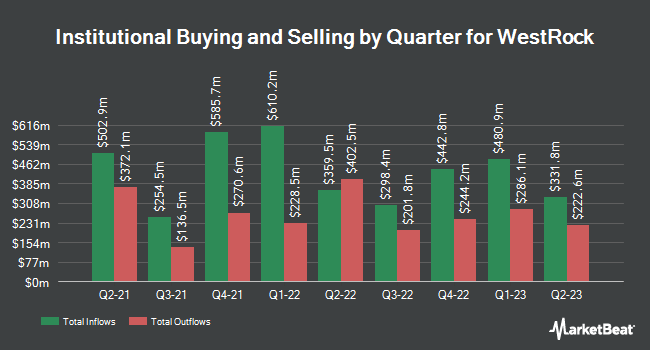 Receive News & Ratings for WestRock Daily - Enter your email address below to receive a concise daily summary of the latest news and analysts' ratings for WestRock and related companies with MarketBeat.com's FREE daily email newsletter.

Complete the form below to receive the latest headlines and analysts' recommendations for WestRock with our free daily email newsletter: