KBC Group NV trimmed its holdings in MSCI Inc. (NYSE:MSCI) by 66.2% in the first quarter, according to its most recent disclosure with the Securities & Exchange Commission. The institutional investor owned 15,773 shares of the technology company’s stock after selling 30,874 shares during the quarter. KBC Group NV’s holdings in MSCI were worth $6,613,000 as of its most recent SEC filing.

In other MSCI news, COO Cd Baer Pettit sold 2,500 shares of the stock in a transaction on Monday, April 5th. The stock was sold at an average price of $430.66, for a total value of $1,076,650.00. Following the completion of the transaction, the chief operating officer now owns 261,802 shares in the company, valued at $112,747,649.32. The transaction was disclosed in a document filed with the Securities & Exchange Commission, which is available at this hyperlink. Corporate insiders own 2.94% of the company’s stock.

MSCI (NYSE:MSCI) last released its quarterly earnings results on Tuesday, April 27th. The technology company reported $2.46 EPS for the quarter, topping the Thomson Reuters’ consensus estimate of $2.25 by $0.21. The business had revenue of $478.40 million during the quarter, compared to analysts’ expectations of $470.34 million. MSCI had a negative return on equity of 226.94% and a net margin of 34.28%. The company’s quarterly revenue was up 14.8% compared to the same quarter last year. During the same quarter in the prior year, the business earned $1.90 earnings per share. Sell-side analysts expect that MSCI Inc. will post 7.84 EPS for the current fiscal year.

The firm also recently disclosed a quarterly dividend, which will be paid on Friday, May 28th. Shareholders of record on Friday, May 14th will be given a $0.78 dividend. This represents a $3.12 annualized dividend and a yield of 0.64%. The ex-dividend date of this dividend is Thursday, May 13th. MSCI’s payout ratio is 48.45%.

MSCI Inc, together with its subsidiaries, provides investment decision support tools for the clients to manage their investment processes worldwide. The company operates through Index, Analytics, and All Other segments. The Index segment primarily provides indexes for use in various areas of the investment process, including indexed product creation, such as ETFs, mutual funds, annuities, futures, options, structured products, over-the-counter derivatives; performance benchmarking; portfolio construction and rebalancing; and asset allocation, as well as licenses GICS and GICS Direct. 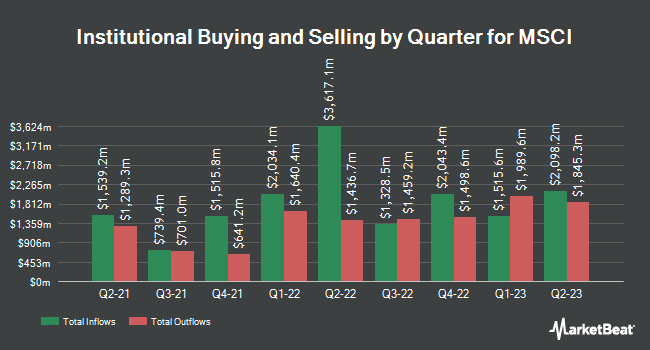 Receive News & Ratings for MSCI Daily - Enter your email address below to receive a concise daily summary of the latest news and analysts' ratings for MSCI and related companies with MarketBeat.com's FREE daily email newsletter.

Complete the form below to receive the latest headlines and analysts' recommendations for MSCI with our free daily email newsletter: