Premier (NASDAQ:PINC) last posted its quarterly earnings results on Tuesday, May 4th. The company reported $0.64 earnings per share (EPS) for the quarter, topping the consensus estimate of $0.51 by $0.13. The firm had revenue of $469.92 million during the quarter, compared to analysts’ expectations of $448.08 million. Premier had a net margin of 3.26% and a return on equity of 65.81%. The firm’s revenue for the quarter was up 40.3% on a year-over-year basis. During the same period in the prior year, the company posted $0.73 earnings per share. On average, equities research analysts expect that Premier will post 2.1 earnings per share for the current year.

In related news, CFO Craig S. Mckasson sold 5,000 shares of the firm’s stock in a transaction that occurred on Thursday, February 4th. The shares were sold at an average price of $35.11, for a total transaction of $175,550.00. The sale was disclosed in a document filed with the SEC, which is accessible through the SEC website. 2.40% of the stock is currently owned by company insiders.

Premier, Inc, together with its subsidiaries, operates as a healthcare improvement company in the United States. It operates through two segments, Supply Chain Services and Performance Services. The Supply Chain Services segment offers its members with access to a range of products and services, including medical and surgical products, pharmaceuticals, laboratory supplies, capital equipment, information technology, facilities and construction, and food and nutritional products, as well as purchased services, such as clinical engineering and document shredding services.

Featured Story: What is a Market Correction? 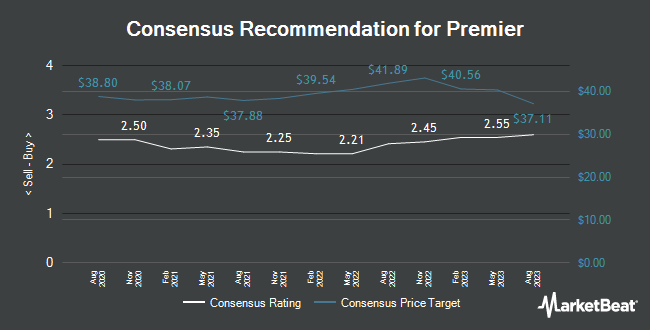 Receive News & Ratings for Premier Daily - Enter your email address below to receive a concise daily summary of the latest news and analysts' ratings for Premier and related companies with MarketBeat.com's FREE daily email newsletter.

$316.00 Million in Sales Expected for OSI Systems, Inc. This Quarter

$0.29 Earnings Per Share Expected for LendingTree, Inc. This Quarter

Complete the form below to receive the latest headlines and analysts' recommendations for Premier with our free daily email newsletter: