$36.31 Million in Sales Expected for Olo Inc. (NYSE:OLO) This Quarter

Wall Street brokerages expect that Olo Inc. (NYSE:OLO) will post $36.31 million in sales for the current quarter, according to Zacks Investment Research. Five analysts have made estimates for OLO’s earnings. The lowest sales estimate is $36.28 million and the highest is $36.35 million. The company is expected to issue its next earnings report on Tuesday, November 9th.

OLO (NYSE:OLO) last posted its quarterly earnings data on Tuesday, August 10th. The company reported $0.03 EPS for the quarter, beating analysts’ consensus estimates of $0.01 by $0.02. The firm had revenue of $35.90 million for the quarter, compared to analysts’ expectations of $34.17 million. During the same period in the prior year, the company posted $0.05 earnings per share. OLO’s quarterly revenue was up 47.7% compared to the same quarter last year.

Olo Inc provides software-as-a-service platform for multi-location restaurants in the United States. The company's platform enables on-demand commerce operations, which cover digital ordering and delivery through online and mobile ordering modules. Its modules include Ordering, an on-demand commerce solution that enables consumers to order directly from and pay restaurants via mobile, web, kiosk, voice, and other digital channels; Dispatch, a fulfillment solution, which enables restaurants to offer, manage, and expand direct delivery; and Rails, an aggregator and channel management solution, which allows restaurants to control and syndicate menu, pricing, location data, and availability. 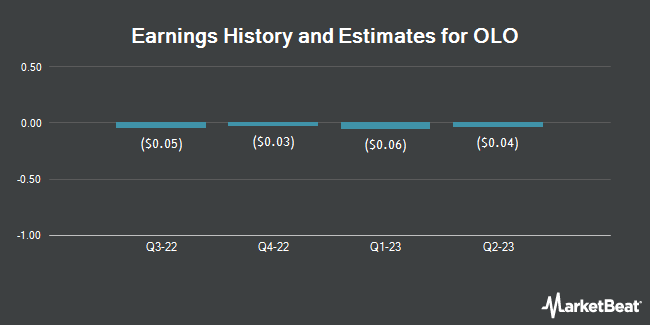 Receive News & Ratings for OLO Daily - Enter your email address below to receive a concise daily summary of the latest news and analysts' ratings for OLO and related companies with MarketBeat.com's FREE daily email newsletter.

SIBCoin Trading Up 11.4% Over Last Week

Complete the form below to receive the latest headlines and analysts' recommendations for OLO with our free daily email newsletter: