Coatue Management LLC bought a new stake in Confluent, Inc. (NASDAQ:CFLT) in the second quarter, according to its most recent 13F filing with the Securities & Exchange Commission. The fund bought 1,725,000 shares of the company’s stock, valued at approximately $81,938,000. Coatue Management LLC owned 0.68% of Confluent as of its most recent SEC filing.

Confluent (NASDAQ:CFLT) last announced its quarterly earnings data on Thursday, August 5th. The company reported ($0.60) earnings per share for the quarter, beating the Thomson Reuters’ consensus estimate of ($0.70) by $0.10. The business had revenue of $88.34 million during the quarter, compared to analyst estimates of $76.48 million. As a group, sell-side analysts anticipate that Confluent, Inc. will post -1.95 EPS for the current fiscal year.

Confluent, Inc engages in developing cloud-native platform for data-in-motion that helps companies to connect their applications around real-time streams in the United States and internationally. The company offers Apache Kafka, a community distributed event streaming platform. Its products also include Confluent Cloud, a managed cloud-native service for Apache Kafka to connect and process data of user companies; Confluent platform, a self-managed platform to connect, process, and react to data in real-time for streaming data from across the organization for customer experiences and data-driven operations; ksqlDB that enables users to build real-time applications; and Confluent hub.

Want to see what other hedge funds are holding CFLT? Visit HoldingsChannel.com to get the latest 13F filings and insider trades for Confluent, Inc. (NASDAQ:CFLT). 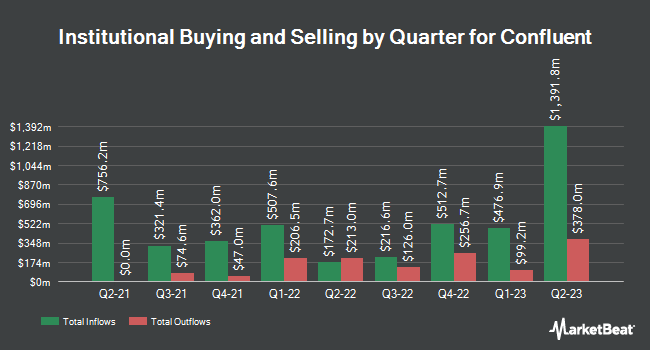 Complete the form below to receive the latest headlines and analysts' recommendations for Confluent with our free daily email newsletter: