The Southern Company (NYSE:SO) announced a quarterly dividend on Friday, January 14th, RTT News reports. Shareholders of record on Tuesday, February 22nd will be paid a dividend of 0.66 per share by the utilities provider on Monday, March 7th. This represents a $2.64 annualized dividend and a yield of 3.85%.

Southern (NYSE:SO) last released its earnings results on Thursday, November 4th. The utilities provider reported $1.23 earnings per share (EPS) for the quarter, beating the consensus estimate of $1.22 by $0.01. The firm had revenue of $6.24 billion for the quarter, compared to the consensus estimate of $6.15 billion. Southern had a return on equity of 11.38% and a net margin of 13.40%. The firm’s revenue was up 11.0% on a year-over-year basis. During the same period in the prior year, the firm earned $1.22 EPS. As a group, analysts anticipate that Southern will post 3.38 earnings per share for the current year.

A hedge fund recently raised its stake in Southern stock. Keudell Morrison Wealth Management raised its position in The Southern Company (NYSE:SO) by 1.2% during the third quarter, according to the company in its most recent disclosure with the Securities & Exchange Commission. The firm owned 18,794 shares of the utilities provider’s stock after purchasing an additional 225 shares during the quarter. Keudell Morrison Wealth Management’s holdings in Southern were worth $1,165,000 as of its most recent SEC filing. Institutional investors and hedge funds own 59.05% of the company’s stock.

The Southern Co is a holding company. The firm engages in the sale of electricity. It operates through the following segments: Traditional Electric Operating Companies, Southern Power and Southern Company Gas. The Traditional Electric Operating Companies segment refers to vertically integrated utilities that own generation, transmission and distribution facilities, and supplies electric services in the states of Alabama, Georgia, Florida, and Mississippi.

Featured Article: Is it better to buy a fund with a higher or lower NAV? 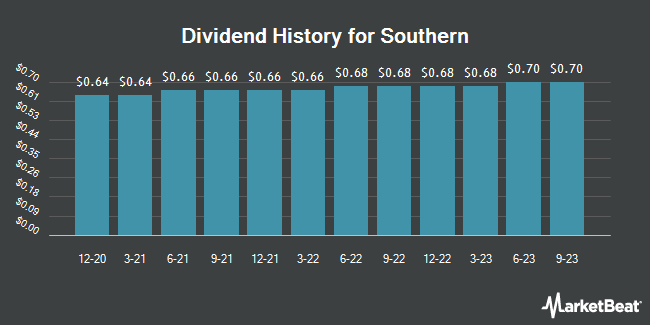 Receive News & Ratings for Southern Daily - Enter your email address below to receive a concise daily summary of the latest news and analysts' ratings for Southern and related companies with MarketBeat.com's FREE daily email newsletter.

Complete the form below to receive the latest headlines and analysts' recommendations for Southern with our free daily email newsletter: