Freeport-McMoRan Inc. (NYSE:FCX – Get Rating) declared a quarterly dividend on Wednesday, June 22nd, RTT News reports. Stockholders of record on Friday, July 15th will be given a dividend of 0.15 per share by the natural resource company on Monday, August 1st. This represents a $0.60 dividend on an annualized basis and a dividend yield of 1.92%. The ex-dividend date of this dividend is Thursday, July 14th.

In related news, Director Hugh Grant bought 12,300 shares of the company’s stock in a transaction on Monday, April 25th. The stock was bought at an average cost of $40.75 per share, with a total value of $501,225.00. Following the completion of the purchase, the director now owns 15,776 shares in the company, valued at approximately $642,872. The acquisition was disclosed in a legal filing with the SEC, which is available at this hyperlink. Also, Director Dustan E. Mccoy sold 8,200 shares of the business’s stock in a transaction dated Tuesday, May 31st. The stock was sold at an average price of $39.24, for a total transaction of $321,768.00. Following the completion of the transaction, the director now directly owns 134,400 shares of the company’s stock, valued at $5,273,856. The disclosure for this sale can be found here. Company insiders own 0.72% of the company’s stock.

Freeport-McMoRan Inc engages in the mining of mineral properties in North America, South America, and Indonesia. The company primarily explores for copper, gold, molybdenum, silver, and other metals, as well as oil and gas. Its assets include the Grasberg minerals district in Indonesia; Morenci, Bagdad, Safford, Sierrita, and Miami in Arizona; Tyrone and Chino in New Mexico; and Henderson and Climax in Colorado, North America, as well as Cerro Verde in Peru and El Abra in Chile. 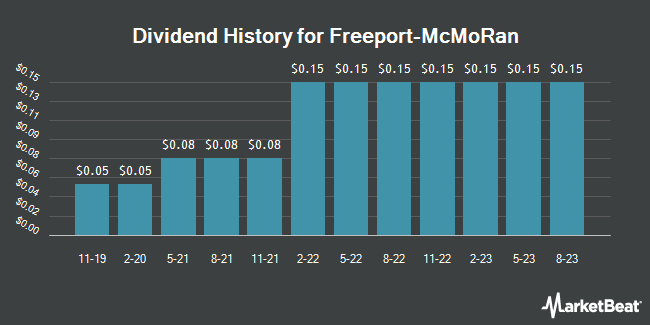 Complete the form below to receive the latest headlines and analysts' recommendations for Freeport-McMoRan with our free daily email newsletter: