Grocery Outlet (NASDAQ:GO) Upgraded to “B” by TheStreet

TheStreet upgraded shares of Grocery Outlet (NASDAQ:GO – Get Rating) from a c rating to a b rating in a research note released on Tuesday morning, TheStreetRatingsTable reports.

Grocery Outlet (NASDAQ:GO – Get Rating) last posted its quarterly earnings data on Tuesday, May 10th. The company reported $0.22 earnings per share (EPS) for the quarter, topping analysts’ consensus estimates of $0.20 by $0.02. The company had revenue of $831.40 million for the quarter, compared to the consensus estimate of $810.39 million. Grocery Outlet had a net margin of 1.74% and a return on equity of 8.65%. The firm’s revenue was up 10.5% compared to the same quarter last year. During the same quarter last year, the firm posted $0.23 earnings per share. Analysts anticipate that Grocery Outlet will post 0.77 earnings per share for the current year.

About Grocery Outlet (Get Rating)

Grocery Outlet Holding Corp. owns and operates a network of independently operated stores in the United States. The company's stores offer products in various categories, such as dairy and deli, produce, floral, and fresh meat and seafood products, as well as grocery, general merchandise, health and beauty care, frozen foods, and beer and wine. 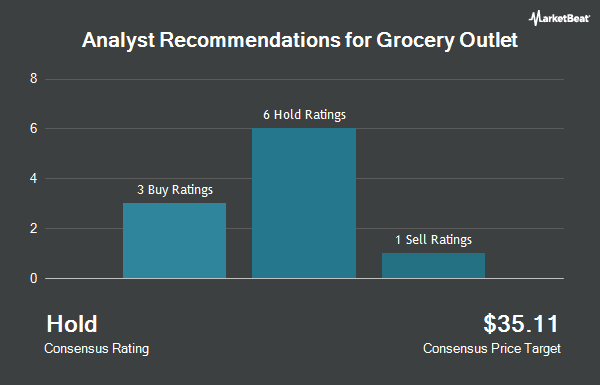 Complete the form below to receive the latest headlines and analysts' recommendations for Grocery Outlet with our free daily email newsletter: