Tim S.A. (NYSE:TIMB – Get Rating) announced a Variable dividend on Tuesday, June 21st, investing.com reports. Shareholders of record on Monday, June 27th will be given a dividend of 0.0822 per share on Wednesday, July 27th. This represents a dividend yield of 2.77%. The ex-dividend date of this dividend is Friday, June 24th.

TIM (NYSE:TIMB – Get Rating) last announced its quarterly earnings data on Wednesday, May 4th. The company reported $0.17 earnings per share for the quarter, beating analysts’ consensus estimates of $0.03 by $0.14. TIM had a return on equity of 9.35% and a net margin of 16.66%. The company had revenue of $904.79 million for the quarter, compared to analysts’ expectations of $1.02 billion. On average, analysts forecast that TIM will post 0.71 EPS for the current fiscal year.

A number of research analysts have issued reports on the company. TheStreet cut TIM from a “b” rating to a “c+” rating in a research note on Tuesday. Citigroup initiated coverage on TIM in a report on Monday, April 18th. They set a “buy” rating for the company. 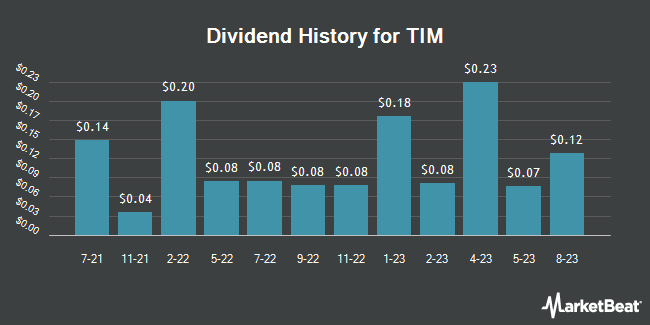 Receive News & Ratings for TIM Daily - Enter your email address below to receive a concise daily summary of the latest news and analysts' ratings for TIM and related companies with MarketBeat.com's FREE daily email newsletter.

Complete the form below to receive the latest headlines and analysts' recommendations for TIM with our free daily email newsletter: