Air France-KLM (OTCMKTS:AFLYY – Get Rating) released its quarterly earnings results on Friday. The transportation company reported $0.04 earnings per share for the quarter, topping the consensus estimate of ($0.03) by $0.07, reports. The company had revenue of $7.15 billion for the quarter.

The firm also recently declared a dividend, which was paid on Tuesday, June 28th. Investors of record on Thursday, June 30th were issued a $1.5641 dividend. This represents a yield of 49.65%. The ex-dividend date was Wednesday, June 29th.

Air France-KLM SA, together with its subsidiaries, provides passenger and cargo transportation services on scheduled flights in Metropolitan France, Benelux, rest of Europe, and internationally. The company operates through Network, Maintenance, Transavia, and Other segments. It also offers airframe and engine maintenance services; component support services comprising electronic, mechanical, pneumatic, hydraulic, etc.; and other services, as well as operates point-to-point flights to/from the Netherlands and France. 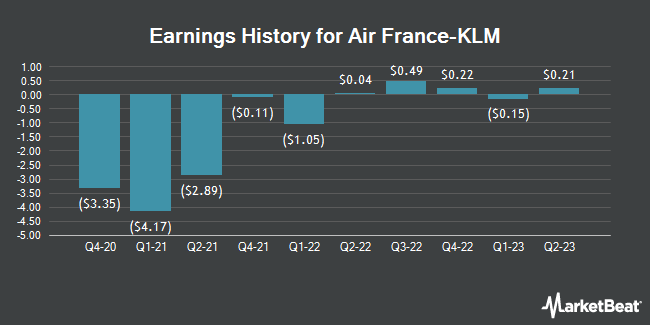 Complete the form below to receive the latest headlines and analysts' recommendations for Air France-KLM with our free daily email newsletter: