Stryker (NYSE:SYK) Raised to B at TheStreet

Stryker (NYSE:SYK – Get Rating) was upgraded by equities researchers at TheStreet from a “c+” rating to a “b” rating in a research report issued on Tuesday, TheStreetRatingsTable reports.

Stryker (NYSE:SYK – Get Rating) last announced its earnings results on Monday, October 31st. The medical technology company reported $2.12 EPS for the quarter, missing the consensus estimate of $2.23 by ($0.11). The company had revenue of $4.48 billion for the quarter, compared to the consensus estimate of $4.46 billion. Stryker had a return on equity of 22.27% and a net margin of 13.69%. The business’s quarterly revenue was up 7.7% on a year-over-year basis. During the same period in the previous year, the firm posted $2.20 EPS. Sell-side analysts anticipate that Stryker will post 9.17 earnings per share for the current year.

Insider Buying and Selling at Stryker

Institutional Investors Weigh In On Stryker

Stryker Corporation operates as a medical technology company. The company operates through two segments, MedSurg and Neurotechnology, and Orthopaedics and Spine. The Orthopaedics and Spine segment provides implants for use in hip and knee joint replacements, and trauma and extremities surgeries. This segment also offers spinal implant products comprising cervical, thoracolumbar, and interbody systems that are used in spinal injury, deformity, and degenerative therapies. 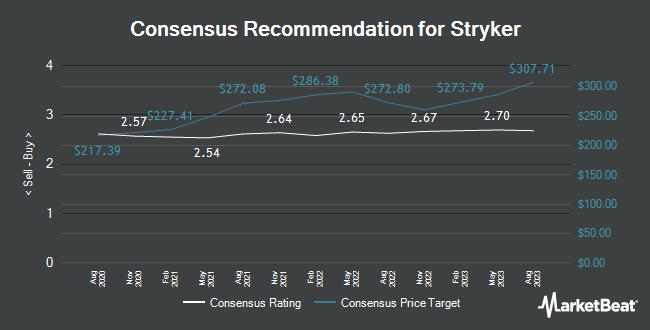 Receive News & Ratings for Stryker Daily - Enter your email address below to receive a concise daily summary of the latest news and analysts' ratings for Stryker and related companies with MarketBeat.com's FREE daily email newsletter.

Contrasting Tompkins Financial and Its Competitors

Complete the form below to receive the latest headlines and analysts' recommendations for Stryker with our free daily email newsletter: