Due to the appearance of new business trends and a perceptible push for innovation, the economy of many countries has been forced to adapt to the ever-changing environment. Compared to the late 2000s, when the world faced the global financial crisis, many economies have been characteri 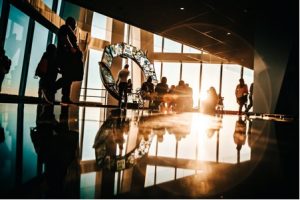 zed by a general slowdown and economic stagnation. Max Polyakov, the managing partner of Noosphere Ventures, suggests that to overcome these hard times and open up new vistas for further growth, there is a need to re-invent the whole concept of economic management.

Where to shift the focus to? Max Polyakov, who has a Ph.D. in Economics has dedicated years to studying the impact of entrepreneurship on economies. Inspired by the works of A. Pobol, V. Vishnevskiy, and U. Latsonik, he came to the conclusion that the longevity of business is primarily defined not by the niche but rather by its innovative component. Innovation, creativity, and originality have become the three pillars of the new economic paradigm.

After the innovation craze gained momentum, the concept of the knowledge economy has caught the public eye. In his work, Max Polyakov describes knowledge as the most valuable asset and a key factor for economic growth. Given the severely competitive market, entrepreneurs who manage to merge the scattered bits of knowledge into a solid unit, are more likely to derive sky-high revenues. But how, you ask? First and foremost, it’s all about the innovation component. Knowledge-driven businesses never stop discovering and implementing new ideas, and are able to outperform their competitors.

Max Polyakov, explains that the knowledge economy does not change the very essence of entrepreneurship. Quite the opposite – it broadens the range of a business’s technological abilities. By producing specific knowledge and providing knowledge-related services, modern businessmen make a lot more money than their predecessors. Speaking about that, the author emphasizes that the word ‘entrepreneur’ has taken on a new meaning. Nowadays, being a successful entrepreneur means expert knowledge of market dynamics, creativity, and Internet literacy.

Now, we’ve approached the last point – the notion of intellectualization. Today’s economy is highly versatile. It’s no wonder we have witnessed its integration with IT. As shared by Max Polyakov, IT and digital technologies represent new ground for business development, driven by the knowledge economy.

Because of the rapid transition from a traditional economy to a knowledge-driven one, each country needs to re-invent the model of their national economies. Backed by the doctrine of the noosphere, these attempts will surely thrive.